Clarksdale, Mississippi— The Magnolia State boasts many music festivals centered around blues.But, according to organizers, none are anything like Clarksdale,Mississippi’s annual Deep Blues Festival in October.

WHAT THE HECK IS IT?

“There’s nothing typical about thisblues festival,” said Robin Colonas, co-organizer and owner of the NewRoxy concert venue. “This is a celebration of outsider and alternativeblues. It’s a crazy-cool mix of Hill Country blues, roots rock andAmericana. As my favorite blues label Fat Possum used to say, ‘It’s notthe same old blues crap.’ This music is alive.”

Thefestival runs from Thursday, October 13 through Sunday, October 16,2016. It encompasses two “official” indoor venues plus many buskingstages and other related events at clubs and juke joints around town.

“Ourvenues are as unique as some of the acts that play them,” explainedColonas. “The Shack Up Inn’s Juke Joint Chapel stage is literally builtinside an old cotton gin, and the New Roxy is a two-stage venue built inthe remains of an old movie theater — half inside and half with noroof. And that’s not even getting into the crazy juke joint scene here.”

HOW DOES IT WORK?

The2016 Deep Blues Festival $75 weekend pass offers the best deal. Thepass acts as a “joint cover” and gets you into the festival’s two mainvenues (the New Roxy and Shack Up Inn’s Juke Joint Chapel) for threenights plus Sunday morning — October 13-16. Daily, single-venue tickets(price TBA) will also be available day of show, while they last.

Therewill be many FREE daytime performances around town as well at placeslike the Jeff Norwood Memorial Stage at Shacksdale, Cat Head Delta Blues& Folk Art and the Rock & Blues Museum. Other related nighttimevenues will have their own usual cover charges at the door.

“We’vegot Deep Blues acts coming from as far away as Canada and Europe,”noted Colonas. “We anticipate enthusiastic turnouts, especially forcrowd favorites like Chicken Snake, James Leg and Possessed by PaulJames.”

And it’s no wonder. As an example, Possessed by Paul James regularly receives accolades like these: “One-man folk wonder.” – New York Times. “Akin to a live electric socket missing its cover.” – Paste.

The basic lineup is online now with more related events to be posted in the coming weeks.

“Thisyear, the Benefactor’s Ball is at Red’s Lounge — Clarksdale’squintessential juke joint,” said Roger Stolle, Cat Head store owner andRed’s fan. “It’s one of the last long-running jukes in existence. Istrongly recommend that folks not only buy weekend passes but alsobecome Benefactors, so they can attend. R.L. Burnside’s son GarryBurnside is set to headline the event.”

Become a Benefactor at http://www.newroxy.com/product/deep-blues-festival-benefactor/

A BRIEF HISTORY OF DEEP BLUES In2007, BBQ master Chris Johnson held the first Deep Blues Festival in afield just outside of the twin cities — Minneapolis-Saint Paul — wellnorth of the Mississippi Delta. While Johnson is no longer an activeorganizer, he is still a big fan of the festival and its eclecticblues-inspired music. This is the 3rd year for the reinvigoratedClarksdale event.

This project is partially funded through Visit Mississippi and Coahoma County Tourism. 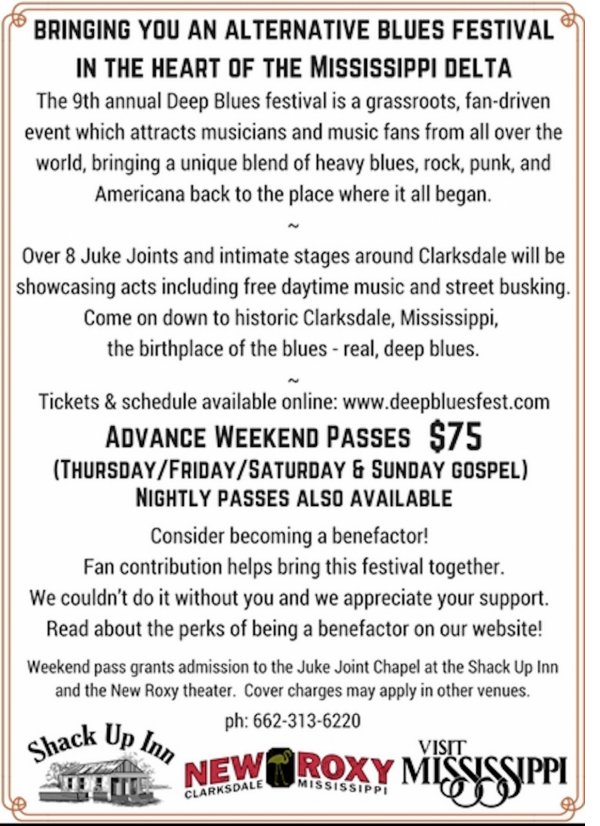